In Corbières Minervois, mountains and plateaus offer breathtaking panoramas ranging from the Pyrenees to the Mediterranean Sea. Take to the skies, you will always be rewarded!

Alaric, slam that name like a banner in the wind. It was that of a Visigothic king who occupied the Languedoc region in the XNUMXth century AD. It is even said that his remains would rest in the caves of this mountain, the northern foothills of the Corbières, to which he gave his name.

To discover an exceptional panorama, from the Congoust gorges near Camplong-d'Aude, the GR 36 takes you to the Alaric signal which culminates at 600 meters and to the Roc de l'Aigle. Another access is possible from Moux by taking the GR77. From there, enjoy the vast 360 ° panorama of the Black Mountain, the Mediterranean and the Pyrenees.
On a clear day we can distinguish the Canigou (dog's tooth), the Madres massif, the serrated Carlit, the pointed Bugarach ...

The Lacamp plateau develops at an altitude of 700 m at the western limit of the Western Corbières. It is crossed by many paths and features forest vegetation, replanted since the XNUMXth century. In the shade of the many conifers, cedars, pines and firs, you will enjoy a shaded walk, with a breathtaking view of the Orbieu valley, the Termes gorges, and in good weather the Canigou against the backdrop of the Pyrenees .

The Mouthoumet plateau (550 m above sea level) is made up of marine sedimentary rocks, noted at the time of the Pyrenean folding. In good weather, this high-altitude terroir offers you a view of the Montagne Noire to the north, the emblematic Canigou to the south and the mythical Bugarach, the giant of the Corbières (1231m).

À Montseret, do not hesitate to climb to the ruins of Bouisse castle by the hiking trail called "The land of Mabile". Even if you will not be impressed by its few ruins, know that the first mention of the castle dates back to the 1th century and that over the centuries and the developments, it has become an architectural ensemble spanning nearly XNUMX ha and a half.

The panorama from the top of the Roque Longue spur is well worth the half hour to climb. The remains of the castle provide the framework for beautiful paintings: the hills very close to the Fontfroide massif to the east; the grated land of the reliefs of the Corbières to the south and to the west the expanse which opens onto the plain of the Minervois and marks the limit of the Corbières Nord.

See you at the elbow farm in the town of Saint-André de Roquelongue and follow it hiking trail which will take you to the heights of the Vernède forest massif, to the locality the Saint-Jacques hermitage. 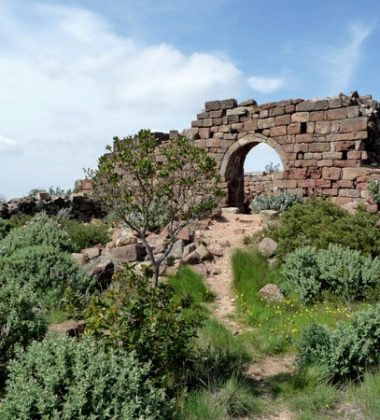 The hermitage of Saint Jacques

You can admire the ruins of the old pre-Romanesque church dedicated to Saint-Martin, which became a place of hermitage in the XNUMXth century, but above all you will be conquered by the panorama on the Montagne Noire and its Pic de Nore, the powerful Alaric des Corbières, the Fontfroide massif, Mont Saint-Victor and Mont Tauch.

From the top of its 420 meters, the Saint-Victor hermitage dominates the Corbières, half ruined by a thousand years of history and wind. At the end of the XNUMXth century, the monk Pierre Lerce of the Abbey of Fontfroide seceded and settled with a handful of brothers on the site of the Pech Saint-Victor, formerly occupied by the small ruined chapel. From this belvedere, long limestone ridges topped with ruined castles stand out against the backdrop of the scrubland. The vine occupies the flat plots in this tormented relief where the rivers have dug deep gorges to open a passage to the ponds. The salt marshes contrast with the curves of the coastline. On the horizon the Pyrenees stand out against the blue sky of Catalonia and the Canigou massif extends to the sea.

In the village of Villeneuve-Les-Corbières, follow the path of Notre Dame de la Récaoufa, in the footsteps of ancient Marian devotions towards the tower and the statue of the Virgin. The Tower was built around 1869, most certainly on an ancient place of pilgrimage. And, it was rebuilt in 1975 following a violent storm and the mobilization of the municipalities of the Durban region. Today this picturesque site you offers a panorama on the Alaric, Mont Saint-Victor, Mont Tauch and the villages of Durban, Villesèque, Cascastel and Villeneuve.

If you borrow the cathar trail in the plain of Tuchan, you can admire the Mount Tauch. It is a mountain of modest altitude but which dominates the entire eastern part of the Corbières massif. Its peak named Pech de Fraysse (lo fraisse: ash), however, rises to 917 meters above sea level. At its foot, the vines of the Haut Fitou vineyard are spread out. At its summit, wind turbines, as everywhere in the region, and a radio relay, the “Tour des Géographes”, accessible by a very small cul-de-sac road. But what a road! The ascent of Tauch on foot is also possible from Tuchan.