The GR 78, chemin du Piedmont Pyrénéen, crosses the Hérault then the Aude from east to west before reaching the foothills of the mountains and finally Saint-Jean-Pied-de-Port then Saint-Jacques-de-Compostelle.

Brief presentation of the route

Reliant Montpellier à Saint-Jean-Pied-de-Port, GR® 78 “Path of Pyrenean Piedmont” is the extension of the Piedmon Wayt. This is "modeled" on an old pilgrimage route allowing pilgrims to Santiago to discover the Marian city (Lourdes). This route connects also the Mediterranean to Atlantic.

For the 6th edition of the competition My favorite GR, the GR®78 is at the top of the finalists!

For theFrench Agency of the Ways of Compostela, association in charge of the animation of the cultural property "Roads of Santiago de Compostela in France" inscribed on the UNESCO World Heritage List, the Way of the Piedmonts is a pilgrimage route, during the Way of Arles (GR 653, passing through St-Guilhem-le-Désert), which stretches at the foot of the last foothills of the Cévennes (the Black Mountain), then, from Carcassonne, plunges towards the Pyrenees in a logic of seeking passes passing.

The GR78 in Hérault

This is at Montpellier that the new GR78 begins but to date the Hérault part is marked out and fitted out only from Capestang, a pretty village on the banks of the Canal du Midi, built around the superb collegiate church of Saint-Etienne. You will then join theAude following the red and white GR markings and the signs indicating “GR78 Chemin du Piedmont Pyrénéen”.

While waiting for the development of the Montpellier-Béziers part, the ideal is to start from the Beziers train station and follow the Canal du Midi to Capestang (Euro Vélo 8 – Canal des 2 mers à Vélo signs). From bus (line 642) also connect Béziers station to Capestang.

Since the Narbonne train station, you have to walk to the Canal de la Robine then follow it to Argeliers via the Canal de Jonction then the Canal du Midi (follow the Euro Vélo 8 signs). To find the GR78 you will have to climb up to Mont Caramel before continuing towards Bize-Minervois. Bize-Minervois is also accessible by bus with the line 21 Citibus from Grand Narbonne from the Narbonne bus station, a stone's throw from the SNCF station.

This is at Bize Minervois that you will enter the Aude. It is also possible to come by bus from Narbonne station. The GR78 continues its way through the Minervois and joins the Canal du Midi at paraza.

The GR78 follows the Canal du Midi and passes Roubia, Argens-Minervois before arriving at Homps. A stop at the House of Wines of Minervois will allow you to discover the wines of this appellation and to find tourist information at the harbor master's office.

A Homps, the GR78 leaves the canal and bypasses the Jouarres lake (round trip on a marked path to reach the beach and swim) before continuing on to Carcassonne (SNCF train station). 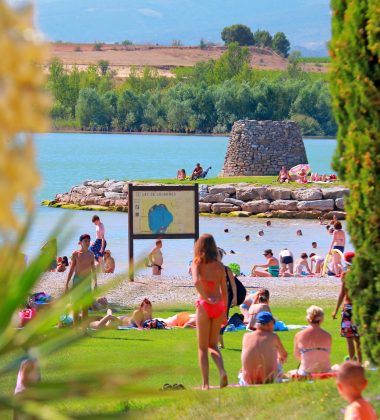 For the 6th edition of the competition My favorite GR, the GR®78 is at the top of the finalists!