Distance: 18,85 km
Level: Very easy
Elevation: 263 D +
Departure: MONTSERET
boucle
Green MTB
In the vineyard
This family circuit is made up of 2 loops: the first towards St-André de Roquelongue from which you will return to Montséret by the path of “Devant la Bouiche”, along the Roquelongue; on the other side, you will see the Fontfroide massif. It is in the heart of this massif that is its abbey. For the second, a short tour in the vineyard to join the Chemin de Lézignan, direction Thézan des Corbières (possible connection with circuit 9); you will see the Boutenac massif and Roque Sestière in your sights. Return to Montséret, crossing the outward route. Circuit 8 of Espace VTT-FFC 198 To see: Montséret: Château de la Bouisse. Saint André de Roquelongue: Saint Jacques hermitage. Thézan: the belfry tower. Viewpoints: the Roquelongue. 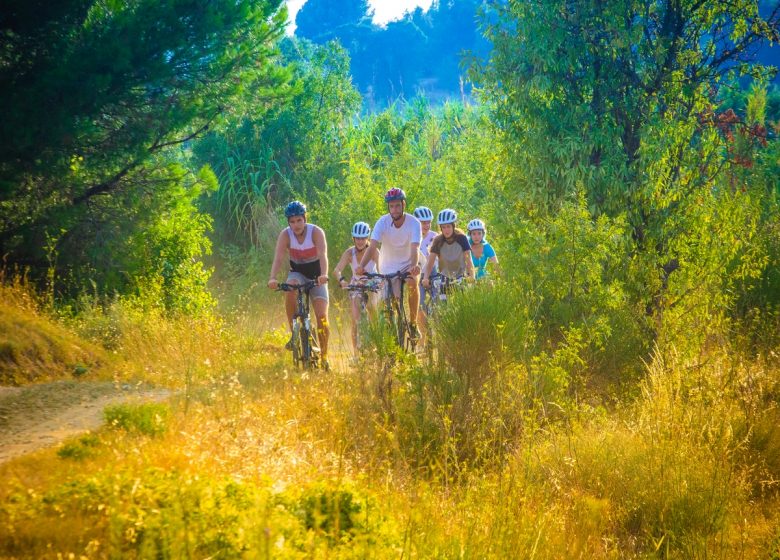 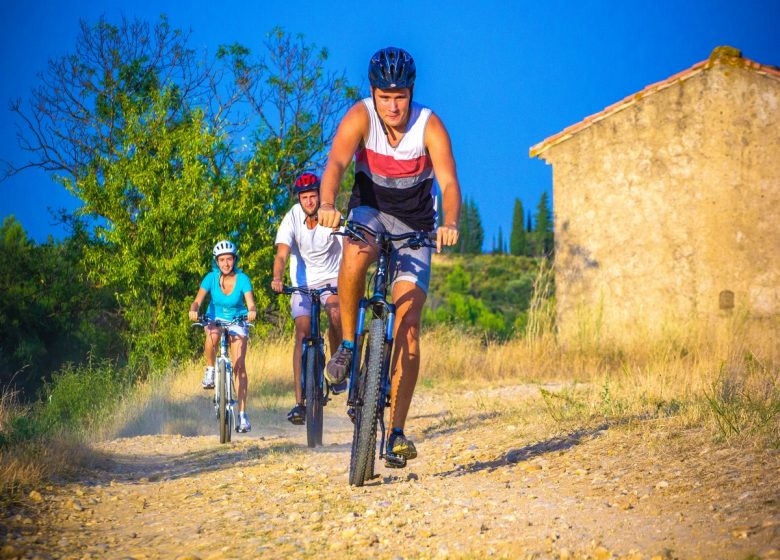 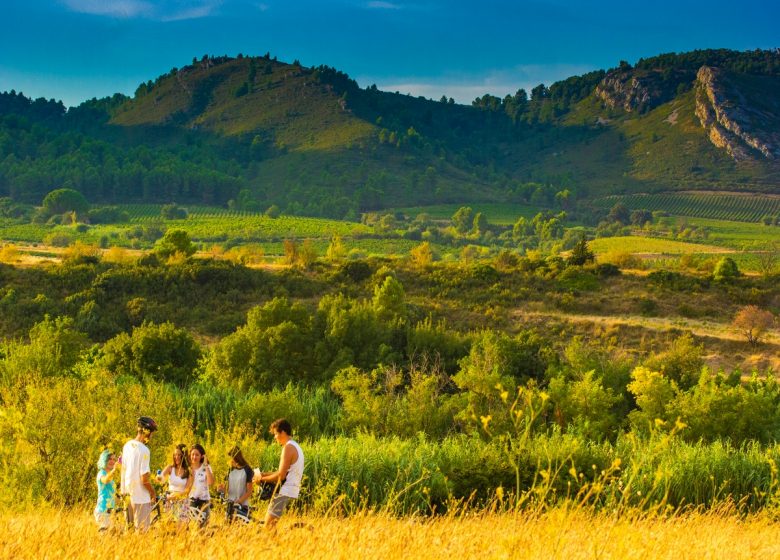 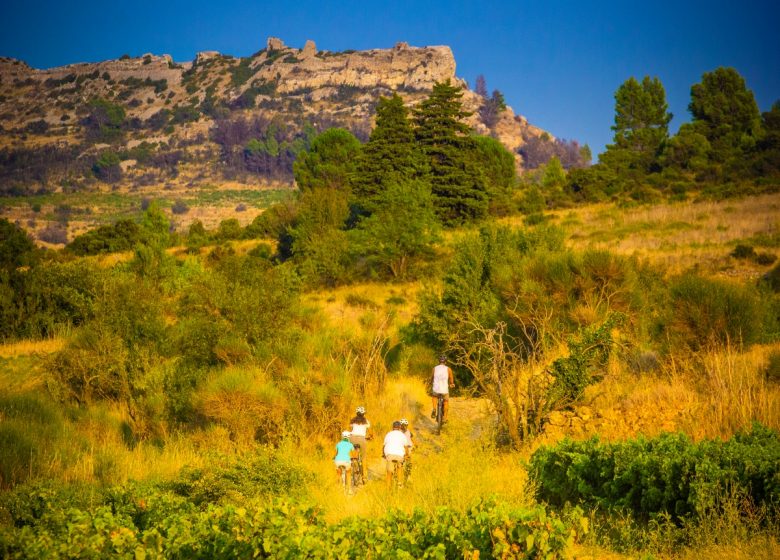 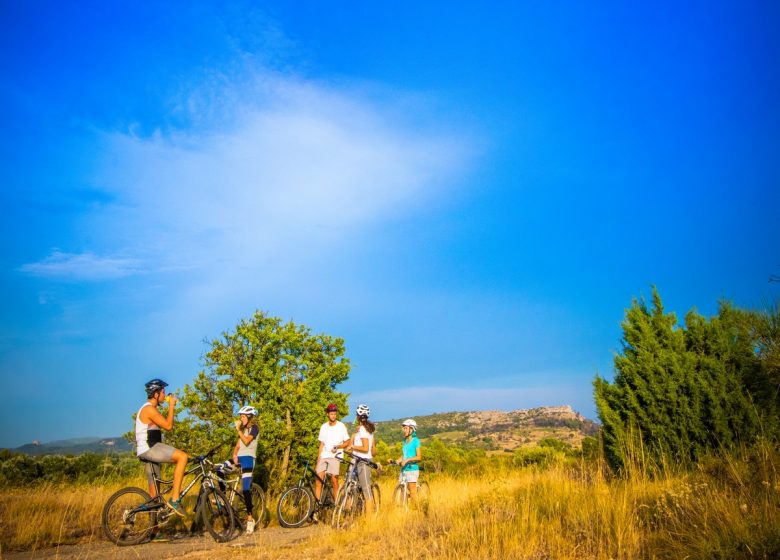 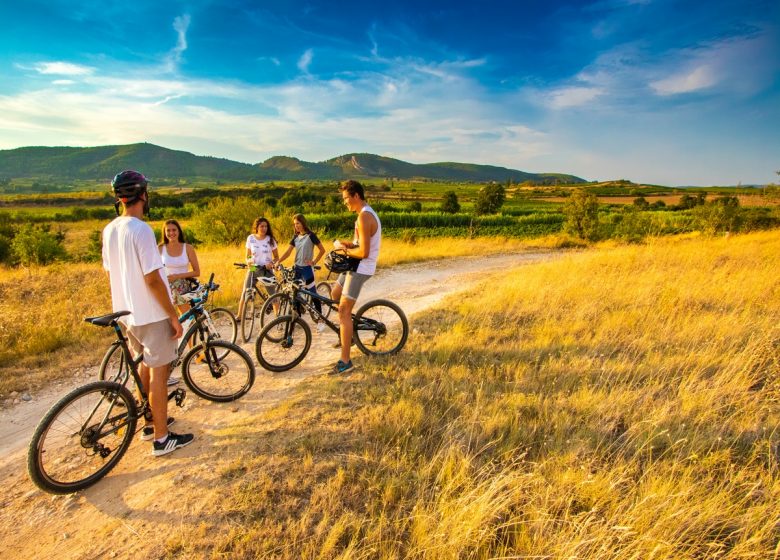 Step not located on the map

From the cooperative cellar, take rue des Bergeries then exit the village on the D423, route de St André de Roquelongue. After about 600m on the D423, turn right onto the small road. Travel about 2000m until an intersection. Join the village of St André on the left. Pass in front of the cooperative cellar and at the roundabout, take the 1st road on the right (avenue de Donos). Via the rue de la Mairie, then the rue du Cagnard, join and cross the Bugua stream then head towards Montséret by the path of “Devant la Bouiche”: under the hill which ends in the south-west by the medieval castle of Montséret (see the PR "the Country of Mabile".) whose summit platform is occupied by a rocky bar, also called La Roquelongue. We join the D423 which we cross to take the small road opposite. After a tour of the vineyard, return to Montséret via the rue de la Combe and the Rampe des Corbières. Cross the village by the rue du Musée, the avenue des Platanes, the rue du Passolis, the D123. After the cemetery, take the path on the left between the vines and join the Chemin de Lézignan then turn right on the D423, direction Thézan. After about 250m turn right onto a small road. Follow the paths of Salobres, on tarmac and dirt roads for about 2700m. At the intersection, continue opposite (you will find the start of the possible connection with the C9 further to the right) and enter Thézan via the route de Narbonne and the rue Lakanal. A little tour in old Thézan is a must. (via Lakanal, du Four Communal, Jean Moulin, D611, de la Source, du Moulin à Vent streets, possible link with the C1 and C6) Return to Montséret: Continue via Lakanal street and Canto Perdrix path, then exit tar for a path through vineyards on the right, also crossing some wasteland, sometimes wooded. We thus join the route of the outward journey on the Salobres path, in the direction of Montséret. Go left on the D423 and after about 250m, turn right into rue du Tramway, cross rue du Lavoir then rue du Passolis and via Place de la Gare reach the car park in front of the cooperative cellar. Do not miss on and off the itinerary: In Montséret, the Roquelongue castle, in Saint André de Roquelongue the Saint Jacques hermitage, in Thézan, the belfry tower, the crossing of the villages and their heritage. Viewpoints: - La Roquelongue Link between circuit 8 and 9 Departure: Thézan, route de Narbonne about 190m after the junction with rue de la Paix Cumulative elevation: 121m Total distance: 2km342m (one way) Rating Described direction of traffic: Thézan / Boutenac pine forest Take the small road which joins the D613; Cross it carefully and continue opposite the small road which climbs due north between the plots of vines. A wide track follows him. It comes to an intersection of tracks: the DFCI tank is a little further on the left.