Distance: 28 km
Duration (average) : 02 hours
Level: Easy
Elevation: 347 D +
Departure: LEZIGNAN-CORBIERES
boucle
This loop is long enough for a blue course, you can cut it in Roubia. It crosses the lands of several wine estates, crisscrossing on roads, paths and trails (partly shared route with the C21) as well as charming villages along the Canal du Midi or the Aude. After Paraza, you will climb quietly towards "les Gantes", you will then have a superb panorama on the meanders of the Canal du Midi in the foreground, and on the whole of the Corbières massif. Between Roubia and Argens you can take a break at Lac des Aiguilles. Be sure to keep your strength for the last climb to the Croix Sainte Anne (possible link with the C 1) in the St Jaume pine forest in Lézignan-Corbières. 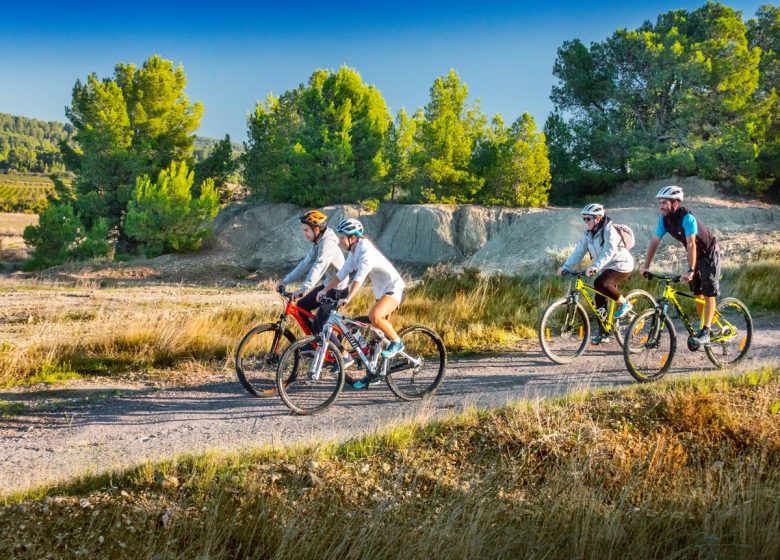 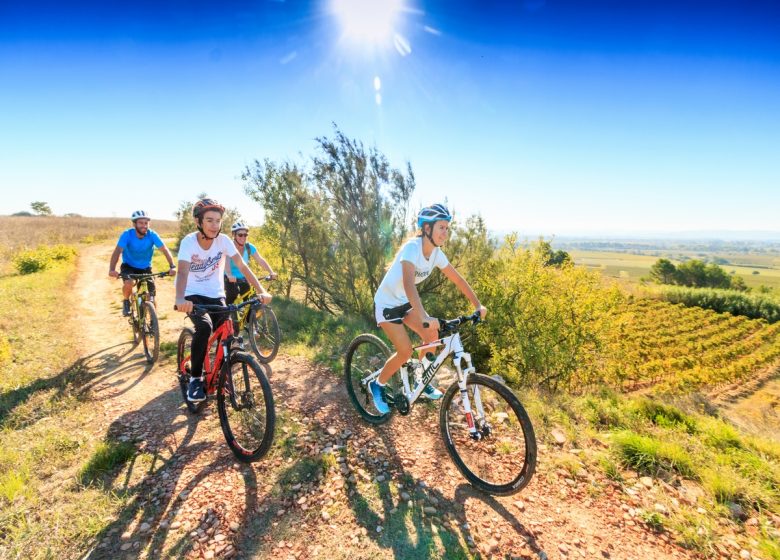 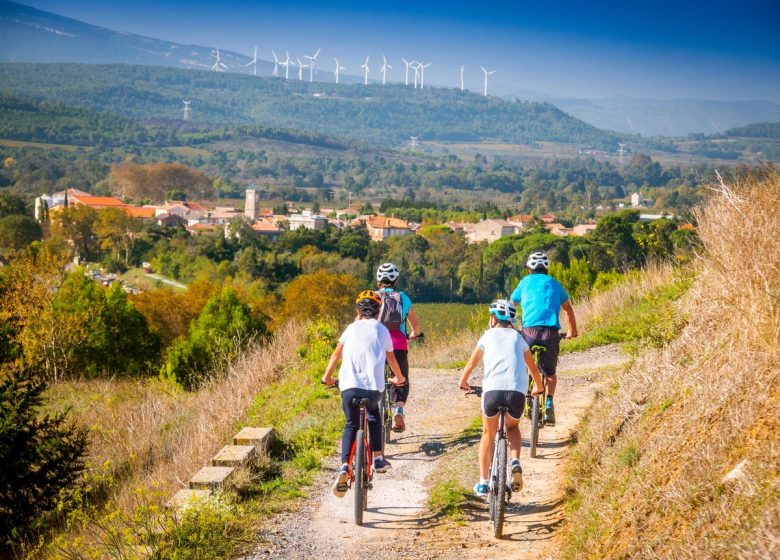 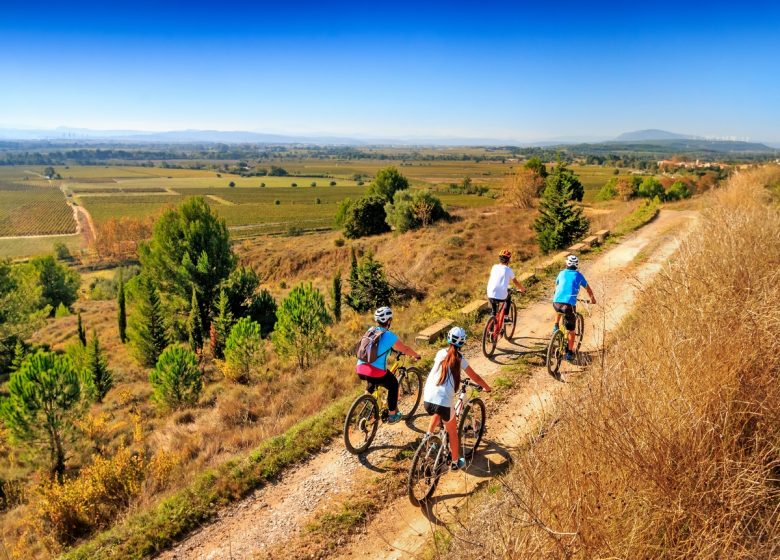 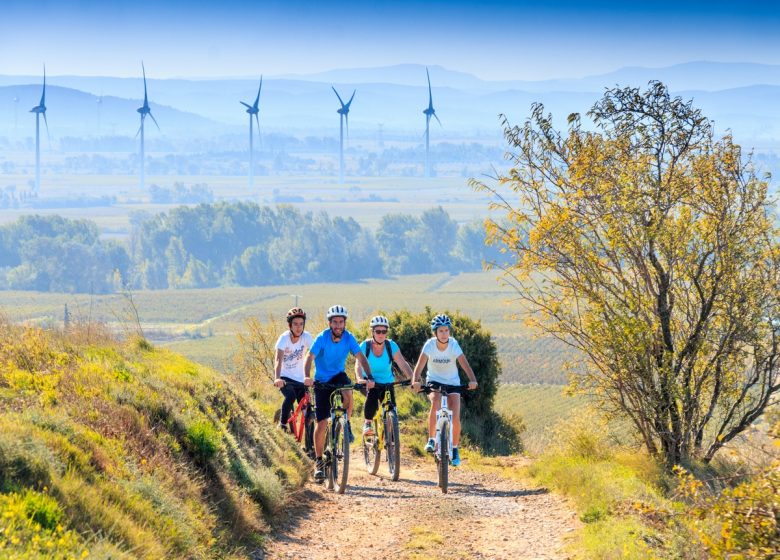 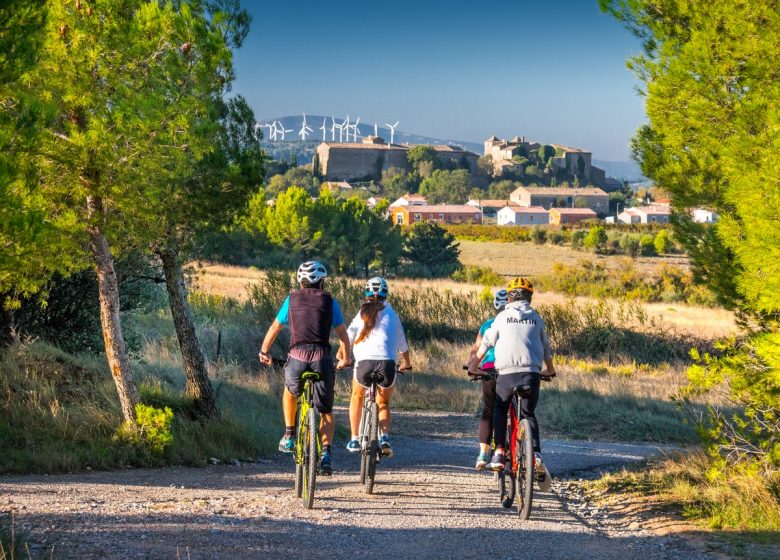 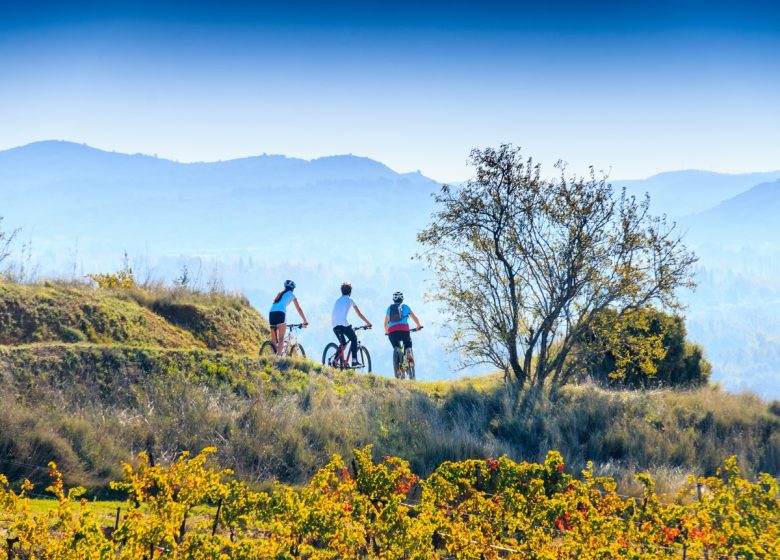 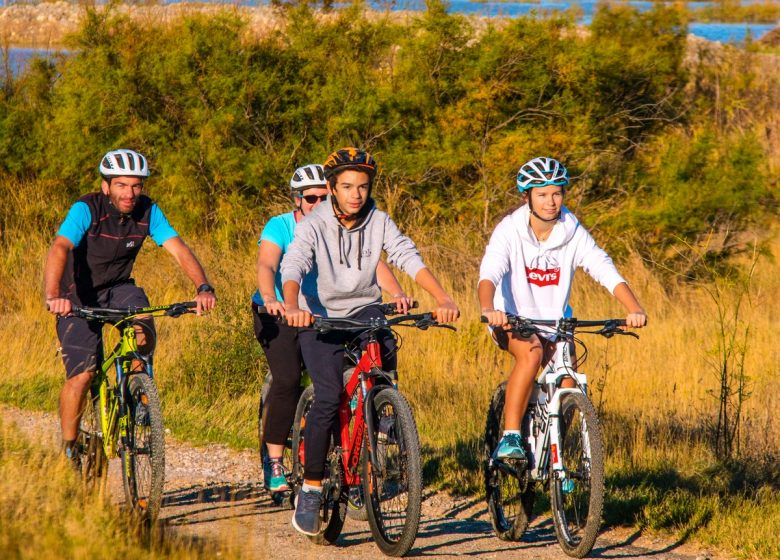 Step not located on the map

By avenue Gaston Bonheur, join the passage under the D6113, along the Rec de La Fumade. Join the impasse Danton, the avenue des Pins, the bd Marx Dormoy and continue on the cours de la République and H de Lapeyrouse (town center). Turn left on bd Châteaudun and continue straight. Cross the D6113, continue opposite on the D67 for about 170m then take the small road on the left known as "Chemin de Montcens". Pass in front of the access to the property of the same name and continue straight on the small road then the dirt track until the property of Montrabech. Cross the D11 and take the pine alley opposite then the 1st path on the right crossing a plantation and land until the D67. Take it to the left. We cross the Aude river then we follow the Canal du Midi to Roubia. Stay on the D67 and after passing the bridge over the canal, turn right. Follow the small road, pass over the Aqueduct stream and about 400m later, take the small road to the right. At the next crossroads, join the D124 on the left, take it to the right then enter Paraza by the canal bridge. Follow the rue du Pont on the left, the rue du Bal de la Plume, the place de l'Eglise then the D167 * to the left for about 450m (* possibility of joining the departure of the C21 circuit by turning right on the D167 then rue de la Mairie). The route is then shared with the C21 “le Pas du Renard” until the D67 which we follow to the left for about 370m. At the entrance of the hairpin bend, leave the road and follow the path straight ahead along the vines and then along the vines, joining the small road passing in front of the Roubia cemetery. Take the D67 to the left until Roubia. In Roubia, follow the common markings to the right with the yellow PR "les 3 bosquets" on the tarmac path of Olonzac. Walk along the pine woods, cross the ford over the Aiguillon stream and 500m later, turn left on the small road on Chemin des Matelles. About 600m later, pass the locality "le Champ des Rats" (greenhouse crops) and turn right onto a vineyard path. Follow a path between wine plantations (! avoid walking along the plots during phytosanitary treatments). Arriving on a tarmac road, turn right for 500m and at the next intersection, turn left. Walk along Lac des Aiguilles then enter Argens, which you cross via rue de la Tour, rue des Amandiers, avenue du Port, the bridge over the Canal du Midi. Join the D611 by the footbridge over the Aude. Continue opposite along the Serame property for about 2200m. After passing under the LHT (possible link with the C19 at 350m), turn left on a vineyard path, cross the Aiguille brook and continue to the D127. Take it to the right for about 400m and turn left in a path between vines, spanning a stream and passing near a barn. Take the rural road on the left entering the pine forest of St Jaume. At the cross of Ste Anne (or Suzanne), we find the yellow PR “the pine forest of St Jaume”, which we then follow. In front of the start of the Vita course (wooden shelter and connection with the C16 see description), go down the small road in the direction of avenue Gaston Bonheur and the campsite (yellow PR). Do not miss on and off the route: the beautiful buildings of the wine estates, the Canal du Midi, the banks of the Aude, the crossing of the villages and their heritage, the Aiguilles lake in Argens. Connection between circuit 17 and 16 Departure: On the D165 between Conilhac Corbières and Montbrun des Corbières Cumulative elevation: 65m Total distance: 4km276 (one way) Rating Described direction of traffic: D165 / Lézignan pine forest Coming from Conilhac, before reaching the pass from la Portenelle, go up the track which starts on the right in the hairpin bend. Drive north for 1200m and always to the right of the wind turbines before heading due east between the vines and then into the pine forest. At the crossroads, begin a passage on the small paved road on the left to immediately locate a path on the right in the pines which emerges further on the tarmac. Continue on the path opposite to the track below (markings for the Lézignan-Corbières SENS botanical path?). Turn right on the route of the PR de la pinède St Jaumes and leave the small road that goes down to Lézignan to turn left onto a large unpaved parking area. Then follow the main track (yellow PR markings) crossing the St Jaumes pine forest until the intersection with the C17 circuit at the parking lot of the Vita course.

Currently, the fire risk is very high and leads to the closure of certain massifs including that of Fontfroide and Pinèdes-Crémades. Find out before you go consulting the fire risk map for outdoor activities.
Fires strictly prohibited. Do not smoke and never throw cigarette butts in nature.
In the event of a fire or accident, give the alert: 18 or 112 from a cell phone and leave the area.
Never approach a fire in progress, both for your safety and not to hinder the intervention of the emergency services.